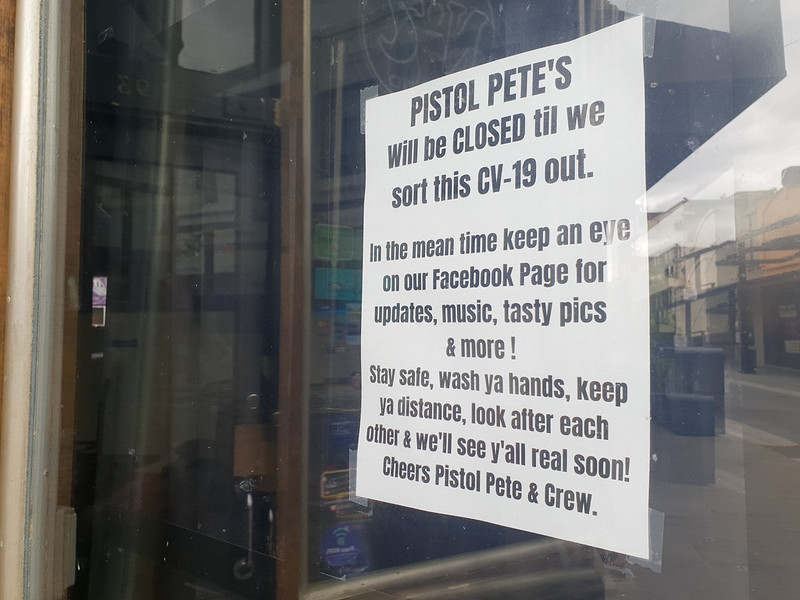 Due to social distancing rules, most of our photography focused on the changes in the Corio area. We have been focusing on areas we can walk to as part of our daily exercise or when doing groceries.

Glenn has been photographing changes near his work. We have also taken photographs when our circumstances meant we were in town.

In February, Oh Dumpling temporarily closed after the owners were self isolating after returning from China.

Stage 3 restrictions started towards the end of March. I went into town on March 31 and noticed that many businesses had closed or changed their offerings in response to the virus threat. The Little Malop Street mall was also empty, with signs warning people not to use the musical equipment.

On April 25, I walked a different way and was able to see what other businesses had closed due to Covid-19.

The restrictions started to ease around the middle of May. Some businesses had started reopening by May 8th. Significantly more were reopening by late May. Gifts for the Geek moved to 105 little Malop Street mid may.

I revisited during late August during the second set of stage 3 restrictions.

I returned in the middle of September, just after the restrictions had eased. Little Malop Street was starting to show signs of life.

What Businesses Permanently Shut Down?

Restrictions Easing At Geelong Waterfront. I also took some photos in black and white.

Playgrounds At Geelong Waterfront Are Closed

Panic buying had started in Mid March, but there was minimal messaging regarding social distancing and the virus threat. This post collects photos from March 15.

I got photos of many businesses operating under Stage 1 restrictions on March 25. Some businesses had stopped serving the public but most were still operating. Some had put basic signage up as well as marks on the floor for social distancing.

Stage 2 restrictions came into effect on March 26. This meant that nail salons and massage parlours had shut down. Many retail stores had voluntarily closed down.

We got photos on March 26. On March 30, more stores had closed down. There was new signage outside the Chemist Warehouse pharmacy and the jewellery shops had stopped operating.

I took photos at the food court on March 25 and 26. The tables and chairs had been blocked off but many places were still operational.

Most stores remained closed until the end of April. In late April, the Radio Rentals store permanently closed down.

I do most of my shopping at my local Woolworths.

People had started to stockpile toilet paper around March 7. Hand sanitizer and some medicines were running low in stock, but you could find what was needed at the pharmacy.

By March 15, the government had started to get more serious with its messaging. Panic buying had really started. Many sections had very little stock. By March 16, it was difficult to get fresh fruit and vegetables.

Woolworths had introduced product limits by my next visit on March 18. Unfortunately, many items were out of stock. This made it more difficult to practice social distancing as I had to go to the shops more often to get essential supplies.

My March 30 visit had more social distancing strategies in store. It also involved the first time I had been able to purchase sausages and toilet paper in over 3 weeks. Things had definitely improved by April 6.

By the end of April, product stocks had returned to normal. Social distancing rules were still in place however some buying limits had been relaxed.

Stead Park: All Playgrounds And Equipment Are Closed

Waterworld Closed Due To Covid-19 Concerns

The team behind The Bottleworks Geelong development worked with local cafes and artists to create a ‘bear hunt’ walking trail. Three artists painted murals on the sides of the building. These were accompanied by QR codes, which allowed the walkers to get a free coffee at a nearby cafe.

Me, Myself and… A Face Mask